In 2016, the top 10 ports in the world were located in China, and Shanghai Port took the lead. Shenzhen, Ningbo and Zhoushan were ranked third and fourth. According to the Ministry of Communications released in February data, if the cargo throughput calculation, Ningbo – Zhoushan Port in 2016 expected cargo throughput of 917.77 million tons, ranked first in the country.

In 2013, China became the world’s largest commodity trading country, maritime cargo trade accounted for about 65% of China’s total foreign trade, and more than 90% of foreign trade goods through the sea to complete. As a transportation and logistics hub, the port is playing an important role in the “all the way” strategy, and it is imperative to speed up the transformation and upgrading of the port.

According to “China Economic Weekly” reporter learned that China’s port is set off a boom in the transformation of artificial intelligence terminal, in early February, the Ministry of Transportation has issued “on the wisdom of port demonstration project to carry out the notice”, and a number of Chinese science and technology innovation enterprises are artificial intelligence Entry point involved.

How does the port become smart?

From the identification of the container number 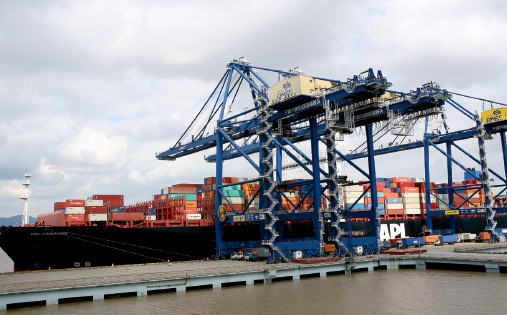 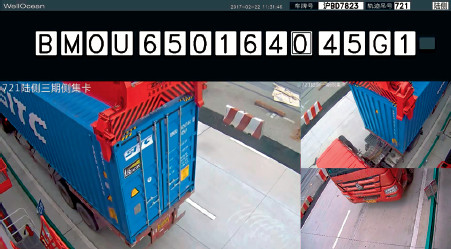 Shanghai Xijing Technology (hereinafter referred to as “Xijing Technology”) as the Shanghai local science and technology innovation enterprises, is currently the only use of neuromorphology engineering (Neuromorphic Engineering) developed brain intelligent hardware, chips and related landing applications of artificial intelligence company. The so-called neural form is the use of analog circuits with ultra-large scale integrated circuit to imitate the human brain’s nervous system, the ultimate goal is to create a simulation of the human brain chip or circuit. The company’s products will be used in the future of things, smart cities and ports, precision medical, large data analysis, industrial 4.0 and other fields.

At present, Xijing Technology has completed the world’s first set of brain wisdom port system “WellOcean”, the system is the world’s first in the field of integrated circuit based on the type of brain-specific hardware and with the unique neural form of artificial intelligence algorithm hardware and software integration Service system, can help the port area to achieve unmanned logistics operations, and ultimately reach the port 360-degree intelligent.

In December 2016, WellOcean, which focused on the sensible tally, was fully operational in the Daxie China Merchants International Terminal in Ningbo – Zhoushan Port. For the first time, the unmanned tally of the container terminal was realized.

The difficulty of identifying the container number is that the box number is not marked in the plane but on the surface, the character area near the very complex texture and noise, coupled with the sea open corrosive paint fall off, etc., but also greatly increased the difficulty of identification of the box The So, how to train a machine quickly and accurately read the above box number?

Xi Jing Technology chief product officer Zhao Zhen to the “China Economic Weekly” reporter said that Xi Jing technology is the use of the world’s leading neural morphology technology, independent research and development of hardware and algorithms, through machine learning can be achieved. As the container operations are usually in the open air environment, vulnerable to the location of the port climate, lighting conditions and other effects, and WellOcean is not afraid of wind and rain, light and other natural conditions limit.

“According to the port statistics, port tally personnel record container number of the average accuracy rate of 92%, and we close to 100%, has exceeded the average accuracy of the human image of the metaphor is the Alpha dog learning chess game victory over humans, Our system has learned to identify the container number beyond the tally personnel, and has been able to adapt to a variety of extreme situations and complex environment. “Zhao Zhen introduced Road.

How does artificial intelligence help “down costs”?

Port industry from the mechanical age to artificial intelligence era has become a large domestic port group consensus, the industry is also active within the action. China Port Association in order to promote the member units between the technical update and exchange, set up a port science and technology committee, and the establishment of the China Port Science and Technology Progress Award and the China Port Technology Invention Award. In the port group members to promote the unit, in 2016 the national port in Qingdao, held the first container terminal automation and technical exchanges.

Shanghai Port Group in its “thirteen five” target clearly put forward the construction of science and technology to lead the wisdom of the port. “International Shipping Center” is ranked in Shanghai to build the “four centers” of the target, so in addition to a world-class port, there should be compatible with the world-class port wisdom system supporting service providers. Xijing Science and Technology is committed to WellOcean to build the world port wisdom of the benchmark system, to promote the application of intelligent port-like port of the industrialization process.

According to reports, WellOcean a period in addition to identify the container number, but also can identify the status of the loading and unloading ship, the port area of ​​the truck top, work lanes, etc., and in the double container operation to synchronize the identification of two different container numbers, identify the container near the front Or the rear. Through the use of this system, the pilot terminal has significantly reduced the original ship unloading time, a substantial increase in the efficiency of the terminal, the future terminal to achieve breakthrough in the original design throughput possible. At the same time, a significant reduction in labor costs, staffing only one-seventh of the original, the remaining tally staff to deal with the port temporary plan changes, not responsible for the container number entry work, and no longer need to work in the job site.

Zhao Zhen told reporters that China’s artificial intelligence is very likely through the port industry into the international. It is understood that, in addition to the investment in Ningbo, Daxie Terminal, a comprehensive pilot, there are already 3 to 4 large port group and Xijing technology began to contact, and these port groups are the world’s top ten China Port Group.

In May 2016, Xi Jing Technology won the third prize in the 2016 China International Electronic Information Starter Competition Finals sponsored by the Ministry of Industry and Information – “Ladder Award”.

Talking about the future, Zhao Zhen said that the current wisdom of the port system is only smart tally, followed by the company will focus on the port internal operations ecology, the development of unmanned wisdom gate, no hoisting, port 360 degrees intelligent unattended and other subsystems, And constantly enrich the class of intelligent brain system, a significant reduction in port operations and management costs to produce greater indirect economic benefits, to promote the container trade logistics chain costs gradually decline, to create a real sense of the unmanned port. Not only the port, with the continuous enrichment of the function of WellOcean, the future it will not only apply to the coastal ports, inland China’s many container transshipment center, logistics bonded area, sea and railway transport and so can use the system of smart tally, , The wisdom of the gate, the area of ​​unmanned driving and other subsystems to achieve the field of container logistics to enhance the efficiency of the company to bring considerable direct economic benefits, but also by reducing the cost of large logistics system, reduce product manufacturing, trade And other aspects of the cost.